What works to improve school enrollment and attendance? Cash In 2018, one in six of the world's school-aged children — more than 258 million kids —were not in school, according to UNESCO. And as that data shows, progress in increasing attendance has slowed dramatically, with the proportion of children who do not attend primary school barely budging in the last decade. This lack of progress is not for lack of effort. Governments and philanthropic organizations spend hundreds of millions of dollars each year on efforts to improve education around the world. So, which strategies reliably work to get children into the classroom?

Direct cash transfers to families have consistently increased the number of kids who enroll in school and the proportion who actually show up. Transfers can come with conditions, like rules that parents must enroll children, or with no strings attached, and other evidence suggests that conditional transfers are more effective than unconditional ones. This review provides some additional evidence to support that view with respect to attendance, especially when conditions are monitored closely.

Cash transfers aren't a panacea — they don't necessarily raise test scores or mean that the kids learn more, but they do get them to show up. They're also not the only option, with school feeding (such as school lunches), latrine construction, and community-based monitoring also seeming to improve education access. More on all that below.

The vast majority of the 50 studies found that cash transfers led to significantly higher enrollment, higher attendance, and lower dropout rates. The findings are reliable and broadly-applicable because of the large number of programs included in the analysis: 18 from Latin America, 7 from Sub-Saharan Africa, 6 from East Asia, and 5 from South Asia, 1 from Morocco, and 1 from Turkey.

Programs were more effective in increasing attendance when conditions requiring children to attend school were stricter and were monitored more closely. Cash transfers are not the only promising interventions: new latrines, community-based monitoring, and food-at-school also show evidence of improving enrollment and attendance.

The construction of new latrines at schools in India and Kenya led to significant increases in enrollment and attendance. This body of evidence is much smaller than for cash transfers, so the certainty of the the results is lower, and this approach would only matter where effective hygiene infrastructure was lacking. But latrine access has been identified as a key barrier to girls' education in particular.

Community-based monitoring programs — interventions to provide more information about school quality, parent opportunities, and student performance — also seemed to improve enrollment and attendance. Again, the number of studies is much smaller than for cash transfers. Such programs also differ from one another in substantial ways, making it difficult to identify which components are effective.

Although they got children into classrooms, it is not clear whether these programs helped those students actually learn. None of the above-mentioned interventions led to significant improvements on the math, language, or cognitive tests that researchers used to measure student learning. This lack of evidence does not necessarily mean that students didn't learn more — they might have learned things they weren't tested on, for example. But the data suggests that these interventions only deal with the one specific problem of getting children to show up.

Nonetheless, getting kids into classrooms is an important goal, and not just because it is a necessary precursor to having them learn more. School attendance can also have important social benefits for both children and the communities they live in. As just one example, evidence from a different 3ie systematic review shows that children who were not attending school were more likely to join youth gangs.

Only one type of intervention showed promise on both fronts, improving enrollment and attendance while also improving test scores: school feeding, where students get breakfast, lunch, or a snack at school. Regardless of which meal was served, the evidence shows that the food encouraged more children to both enroll and attend. With seven studies measuring enrollment and six studies measuring attendance, the evidence base is not as substantial as with cash transfers. These studies also mainly took place in food insecure locations, where additional meals are likely to have the greatest effect. These interventions also showed evidence of improving student learning and test scores, an outcome which fits with research about the link between nutrition and cognition. We'll have more details about the learning outcomes in our blog post next week focused on those issues.

For more information about the study's findings, methodology, and implications, the full study and a shorter summary are available here. Beyond this study, hundreds of other systematic reviews and thousands of impact evaluations are available in our evidence hub here.

This is the second blog in our campaign 2020 Hindsight: What works in Development. Learn more about the campaign here.

Thank you very much Mr. Paul Thissen for giving us a fairly different perspective of how to improve school enrollment and attendance by means of Cash. Emphasizing on factors that has helped the situation enhance and the attendance becoming higher is remarkable. The cash transfer program seems to be showing a greater deal on the systematic review an analysis conducted. 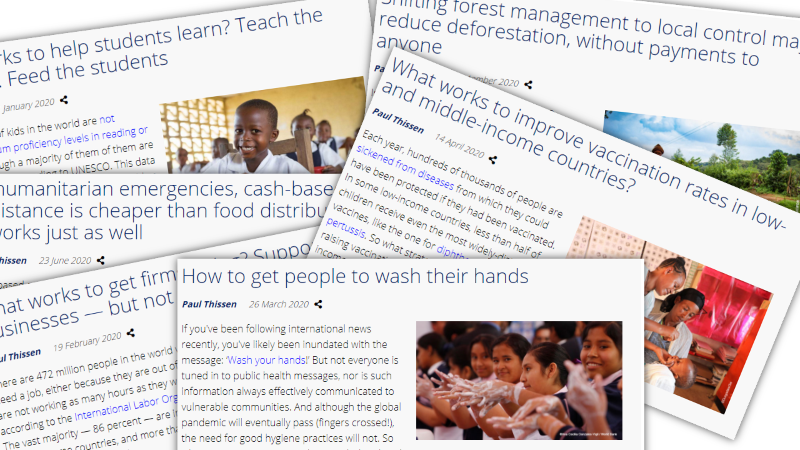